Velocettes crossed the finish line 1st, 2nd, 3rd at the Burt Munro Challenge 2015. This would not have been an unusual sight on the racing circuits of England and Europe through the 1920s 30s or even late 40s. However Invercargill in November 2015 at the bottom of the world in New Zealand? An unlikely treat for those with a taste for vintage racing motorcycles. Phil Price picks up the story.
END_OF_DOCUMENT_TOKEN_TO_BE_REPLACED

Phil Price tells the back-story on the Velocette MKVIII KTT 1079. 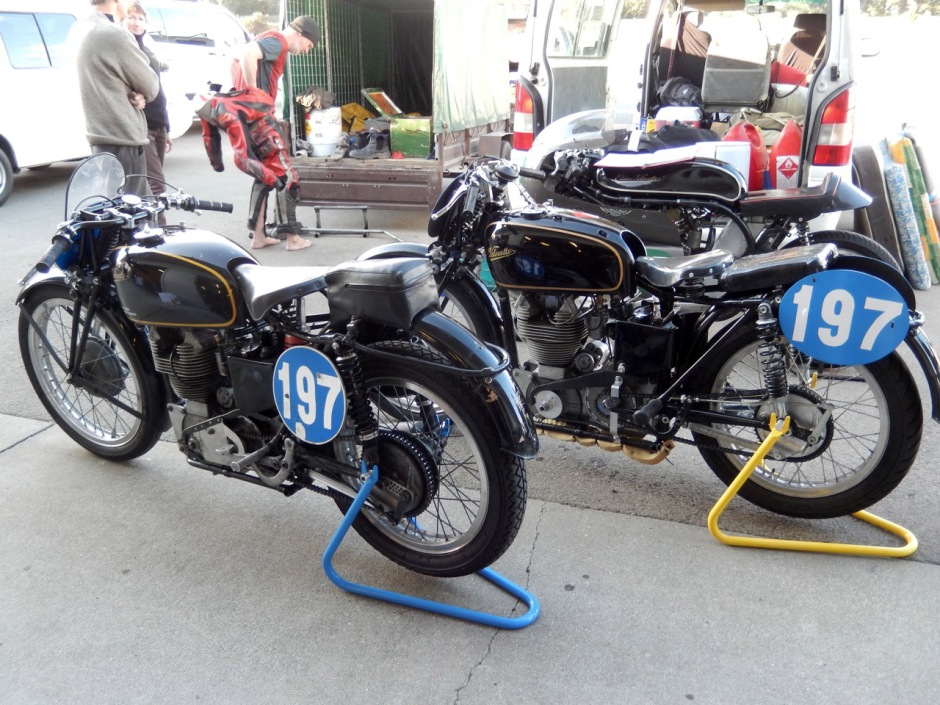 A pretty pair with Eldee2 in background.

Factory records only note this machine, quite late in the production of post war MKVIII KTT’s was a new export direct to Melbourne, Australia. Not much has surfaced about its history between then and my acquiring it at a Bonhams auction on the eve of the Rugby world cup final, hosted in NZ 2011. Eldee2 has taken most of our enthusiasm since then but this year the dust was blown off 1079 with the intention we always had for this bike which was to develop it a little more than the famous and well documented 1041 from Arthur Wheeler. The few connections I have made into Velocette folk in Australia tell me Leo Andrews, the owner and restorer of this KTT for some 3 or more decades and who’s estate was being auctioned that spring day was a fine, capable, and knowledgeable chap. Certainly the bike appeared to be correct with all essential bits there, evidence of many hours spent on detail fixings mostly correct. As per usual on Velocette restorations the visual appearnce of the bike was let down by the seat, guards, exhaust pipe, and bars. So while Nick Thomson set to on the all important mechanicals I appointed myself on getting these details more as they should have been in the day. END_OF_DOCUMENT_TOKEN_TO_BE_REPLACED 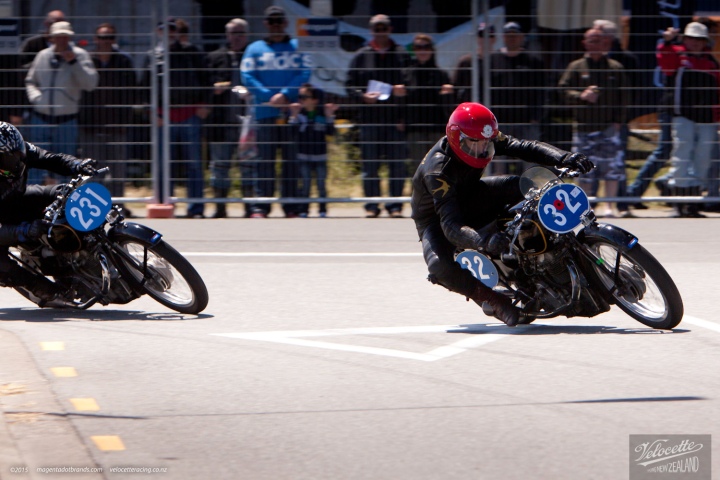 Velocettes at the Burt Munro Challenge 2015

The VRNZ Classic Velos competed in the Pre ‘63 (with girder forks) Class along with Neville Mickleson’s KTT, Rudges, a Triumph and an Indian and other famous marques pictured in the galleries below. Several riders from the VRNZ camp also raced machines in the Classic Pre ‘63 class, and the Post Classic Pre ‘72 class, galleries of those classes at the event are included below. The trio of cammy 350cc KTTs and the Velocette “Big Velo” 500 are featured in the Classic Pre ‘63 with girder forks slideshows at each event, the galleries of all the other bikes in the Classic Pre ‘63 and the Post Classic Pre ‘72 classes, including the Eldee Velocette, are in labelled galleries. There are also galleries of scenes below from the  Classic Pre ‘63 motorcycle pits and Dummy grids. Completing the photographic project documenting the event another page of photo galleries of all the other classes will be published soon over at MagentaDot Brands. This will chronicle all of the Classes of motorcycles that raced at the 2015 Burt in the events listed below. There is also a selection of shots of motorcycle pit culture, the support teams, machines and the crowds in and around the four day festival of events. I’d like to extend a vote of thanks to all the riders who put it all on the line, their support crews, the event marshalls, organisers, admin and sponsors that made the 10th Burt the festive, thrilling spectacle that it is. Finally kudos to Wellington Velo man Nic Thomson for the outstanding achievement of developing, race prepping and fettling the four Classic Girder Velos that achieved so many historic wins at the Burt and finally acknowledge the remarkable fact also that all bar-one both started and finished every event entered over the four thunderous days in November.
END_OF_DOCUMENT_TOKEN_TO_BE_REPLACED 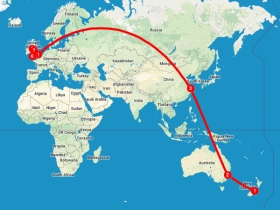 I DELIVERED ELDEE-2’s new aluminium crate to Lucas Palmer at Auckland Airport with assistance from Ken Macintosh a few weeks before the Manx. At 280 kg, it was packed with all the tools and spares we could think of including the original Eldee 2 motor. It took 36 hours to get to the U.K. where it was received by Andy Farrow who kindly delivered it to a depot in Somerset where Velocette Owners Club member Will Wells picked it up.
END_OF_DOCUMENT_TOKEN_TO_BE_REPLACED

EVERY NOW AND THEN you see a project that takes on a life of it’s own. The story of Eldee is part of NZ’s racing folklore. The twist is that a dedicated bunch of enthusiasts, including our classic man, Chris Swallow, have serious plans afoot—but they might need a wee bit of help…

NOT SO EAGLE eyed observers visiting the Honda museum in Motegi, Japan  will notice soon after paying their yen there is a racing motorcycle devoid of the familiar winged Honda vector. The emblem is distinctly Italian and proudly informs that you are ogling over a ‘FB MÒNDIAL’: made 1957, Milan by the Counts Bosselli (‘FB’ being Fratelli Boselli or Bosseli Brothers) and their firm Mondial. It is a gear driven double overhead cam (DOHC) 125cc Single Cylinder Grand Prix motorcycle, brought by one Soichiro Honda, direct from Count Boselli shortly after it won the 1957 World Title.

1957 was the year the Italians (with the exception of MV Agusta) all pulled out of Grand Prix racing due to the cost of it all; prior to this they had been leading exponents of high revs, high performance and high reliability; characteristics clearly endearing to Mr. Honda and his fledgling motor company.

Les Diener was a racer and a brilliant engineer.
END_OF_DOCUMENT_TOKEN_TO_BE_REPLACED 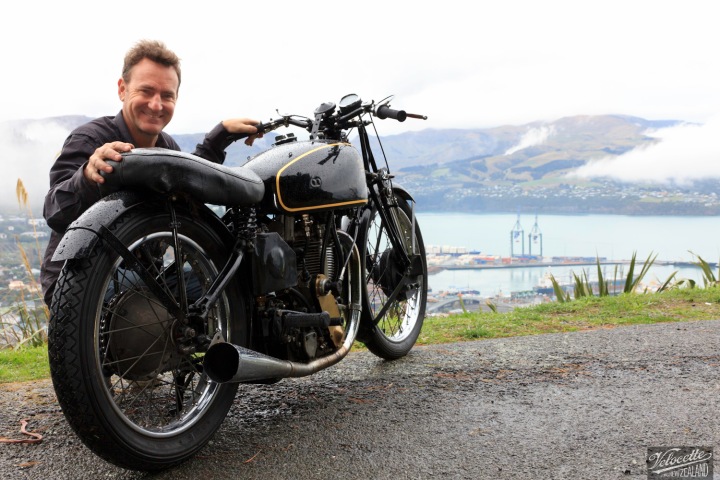 As I had only heard about ‘Big Velo’ in revered and almost mythical tones, when friend and new owner Phil Price of Christchurch telephoned to say he would be honoured if I’d race this piece of New Zealand history at the 2014 Burt Munro Challenge, the honour was most definitely mine.

In 1924 Veloce Ltd produced a single cylinder 350cc bevel driven single OHC engine: elegant, reliable and powerful, the model ‘K’ was the precursor to the highly successful KTT lineage. So impressed by the marque, top rider Alec Bennett offered his services for the 1926 Isle of Man Junior TT on a no-win, no-salary basis. He duly won the seven lap, 264.11 mile race in a shade under four hours at an average speed of 66.7mph: Jimmy Simpson, on the works AJS, was runner-up over ten minutes adrift. Bennett’s salary was not recorded.

Les Archer at speed aboard the Big Velo.

Driven by the desire to achieve on the race track, the years up until the war saw concerted and focused development gaining Velocette a worthy reputation and a large share of the growing international motorcycle market; this in addition attracted talented riders such as Freddie Hicks, Les Archer, Wal Handley, Walter Rusk and Harold Willis to the works. Willis, whose career best at the IOM TT was two second places (runner-up to Velocette mounted Alec Bennett in 1928, Bennett’s 5th IOM TT win) eventually took charge of the Veloce Ltd race programme and decided that for the 1934 season the ‘blue riband’ 500cc class was to be contested. It was decided that Percy Goodman’s conception of some ten years earlier to enlarge a 350cc ‘K’ series engine was a worthy notion, and so, in 1934, MT5001 ‘The Big Velo’ was born. MT denotes factory experimental racing, and then Number 1 500cc is the rest.
END_OF_DOCUMENT_TOKEN_TO_BE_REPLACED